Kickstarter Page : successfully funded!
Hop in to join the Backerkit late-pledge and pre-order your copy.

PS:
The free wiki-rulebook is complete, tested and playable, but will eventually be updated to the revised text produced through the Kickstarter. It will happen after the commercial PDF version, published by MS Edizioni, gets released later in 2022.
Stay tuned for updates!

Fantasy World is a game that focuses on dramatic fantasy adventuring.

Dramatic fantasy is not about soap opera melodrama among teen wizards, although this could be a lot of fun, please someone make this game!

When you don't care, something as epic as saving a kingdom could feel like a trivial and bothersome chore. When you do care, something as trivial as keeping a promise to a random village kid can feel epic and fulfilling. What this game's rules do is help you and your friends inject this level of meaning and engagement in whatever kind of adventure you end up playing.

Is This For You? Yes!

Fantasy World is a tabletop roleplaying game in the PbtA family.

If you're wondering what an RPG even is, worry not! I will explain all you need to know to go from zero to expert in the easiest way possible.

If you are a veteran roleplayer but are new to the ways of PbtA games, you're going to be fine too. I'll show you the lay of the land, the WHYs and HOWs, and all the juicy bits this kind of system has to offer.

And if you are well versed in many different PbtA systems, I hope to pique your interest too. Fantasy World tosses out the window a few things that are considered standard (or even trending) in many PbtA games, turns unspoken guidelines into explicit procedures, and adds some original mechanics into the mix.

Most Powered by the Apocalypse games shine because of some amazing idea that sits at their core. But too often they also end up prioritising style and novelty over clarity and practicality.

A common result is that the rule-book alone is not enough to learn how to properly play, requiring previous expertise in PbtA systems to fully understand the game's inner workings.

Another common problem is the lack of clarity in how some mechanics work, leading to the need for on-the-fly negotiation and interpretation of things that should instead be unequivocal and straightforward. Moves are very susceptible to this.

This state of affair prompted me to write a game that starts from a simple and familiar idea, ye olde fantasy adventure, and then focuses on being as user friendly and pragmatic as possible.

I put together this website to offer free and easy access to the full Fantasy World rules. My hope is for them to help people better understand other PbtA games too, how they are different, how they are similar, how they are brilliant and, sometimes, how they bump into problems. And to present a few ideas of my own, to try and push the envelope a bit further.

It might not be a veritable PbtA Next... but that's the general direction I'm aiming for. 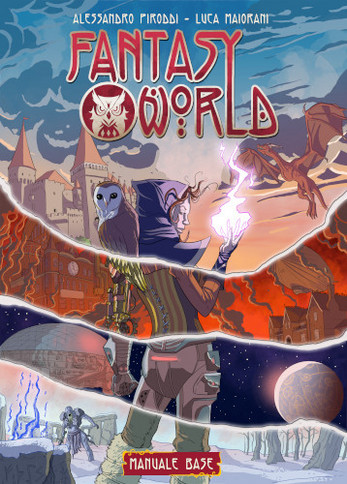