The Name of God is a dark little game inspired by such works as Neil Gaiman's Neverwhere, American Gods and Anansi Boys. And The Prodigy's song Narayan, which more or less means "The Name of God". And also to my undying love for the traditional rpg Unknown Armies.

The game is a cynical trip into a bizarre metropolitan hole, filled with homeless people, weird omens, dangerous situations, and ritual chanting. No, seriously, you will have to intone the words, or you will never find your true self again!

The PDF presents a printable deck of about 30 full colour cards in both poker and tarot sizes. A few explain the rules of play. The other 24 each represent a unique Fetish, a character archetype inspired to some grim urban item, location, stereotype or concept.

Every card has been illustrated by artist Julia Roth.

Every fetish has been developed by an amazing team of 15 indie designers, whom I heartfully thank for helping bring this game to life and growing it into so much more than it's original scope. They are, in alphabetical order...

Becky Annison is swimming in The Lake

Meguey Baker is weaving The Thread, and rolling The Stone

Caitlyn Belle is causing The Glitch, and tending The Garden

Stephanie Bryant is pitching The Song

Emily Care Boss is soaring as The Leaf, and rattling The Bones

Dana Fried is forging The Anvil, and erecting The Wall

Wendy Gorman is giving us The Shiver

Renee Knipe is picking up The Broken Bottle, and lighting The Candle

Kira Magrann is hatching The Serpent, and piercing The Veil

Megan Pedersen is burning up The Match

Ariana Ramos is spinning The Spider

Brianna Sheldon is weeping The Tears, and awakening The Kraken

Heather Silsbee is aiming The Arrow

Manuela Soriani is dreaming up The Butterfly

...and my original four Fetishes:
The Worm
The Stars
The Winter
The Shadow

TNoG was born in 2013 out of the 200 Words RPG Challange.
It was successfully Kickstarted in 2013, becoming a gorgeous and much expanded deck of cards.
Then in 2019 the rules were completely rewritten to benefit from seven years of actual play and experience, all collected into the Deeper edition. This is a 13 pages PDF explaining in the most clear and accessible way possible all the ins and outs of the game, fixing a few minor problems, answering frequent questions and offering variant game options.

The itch.io package includes both the KS cards and the Deeper rulebook.

The itch.io package is a multi-language PDF of all the cards, plus the English-only Deeper rules. It's a fine print-and-play version of the game.

But for those who would like a nicer card quality there are language specific print on demand versions available on the DriveThru  websites:

The Name Of God is a 2--4 player narrative cardgame. It comes with a thorough 13 page instruction booklet, and 30 game-specific cards with cool location-based art.

In Name, you play as an American Gods style divinity---your power eroded and forgotten. You work to recover it by performing rituals in places of significance within your city.

The cards give you prompts for what to do, but most of the gameplay is storytelling. However, the GM role rotates around the table, and players are absorbed into the GM role as their characters die. This is a nice way of handling PC attrition---although it does require people to be comfortable managing the GM spotlight, rather than the player spotlight.

The GM role is also very tightly shaped by specific directions and requirements. During certain points in gameplay, the GM is told to do a thing, or explicitly avoid a thing, and overall they're less of an adjunct to the game that adjudicates disagreements over what happens next, and more a cog in the game's engine. I don't think this is bad, as it ensures the GM isn't likely to accidentally break anything, but depending on GMing style some folks might object to the constraint.

So, wrestling a gun away from someone? Kicking down a door in a burning building? Sneaking past a killer? All autofails with terrible consequences.

Moreover, the game urges GMs to kill characters when they can, and this feels like it incentivizes a game that's about laying low and avoiding trouble. Except then the GMs have to work twice as hard to introduce things that will threaten / challenge PCs, and ultimately if they don't want to put a PC into a death-spiral of tough + dangerous checks, they have to back way off after introducing each threat in order to give the PC a chance to back way off too.

GMs can avoid this by taking situations that are both dangerous and tough and only treating them as dangerous or tough (for example, my "sneaking past a killer" example above, could be treated as only tough in order to avoid having hostile enemies autocatch and kill PCs.) But in that case, why not just make the mechanics Polaris: PCs succeed, provided they're willing to pay the cost the GM names?

Overall, Name Of God is an atmospheric game that evokes a lot of the same energy as Unknown Armies, Condemned, or Manhunt. If your group is very comfortable GMing, I think it'll make for a phenomenal oneshot. If you're not comfortable GMing, or if the premise doesn't grab you, it's still a cool game, but may not be what you're looking for. 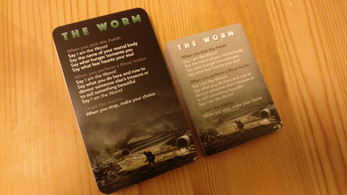 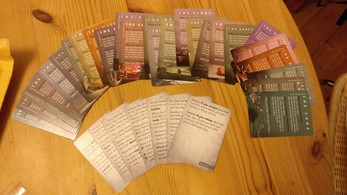 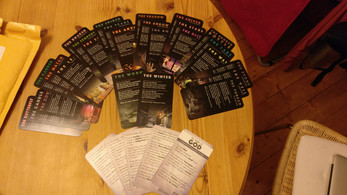