In this game you and your friends play the role of characters in a very specific kind of horror story: normal and rational people, in a normal and rational world, that slowly starts to feel increasingly wrong and unsafe and disturbing, in a crescendo that will lead to a horrific epilogue.

This kind of horror focuses less on gore and violence, and more on unease and dread. Depending on your reactions to the game’s inputs and twists you will experience a story reminiscent of some madness inducing H. P. Lovecraft novels, or rather akin to some psychedelic body-horror Clive Barker short stories. Either way, you play as the unfortunate protagonist of one such narrative.

Not everything will be nice and tidy by the end of the game. Questions might still linger unanswered, details might still feel odd and out of place, but overall your journey will be at an end, offering a degree of closure, in the vein of movies such as The Shining, Jacob’s Ladder, The Wicker Man, The Others, and more.

I got this as part of a bundle, i can download the play sheet but nothing else

edit: for some reason, the itch app only shows the play sheet, but if you 'find' your bundles, then search within them it shows all files...

Now I've got both am looking forward to playing, looks pretty good from what I've read so far!

I'm happy you found a fix, and I hope you'll enjoy the game :D

I really don't know what I could do on my end, though :/
Maybe delete all files and re-upload them?

No worries and thanks for the reply... Also, and I guess it's because I'm dumb and didn't look properly, next to whichever file you have selected, there's a down arrow and you can select the next/previous available file to download ( although it's not entirely obvious tbh )

Touched By Evil is a multiplayer slow-burn horror rpg, where everyone plays a single protagonist on their way towards an unfortunate outcome.

The PDF is 22 pages, with very simple layout and a few helpful graphics, and it comes with a set of 4 pages of playsheets that further clarify the rules and serve as a handy reference.

TBE does a very good job at nailing down the structure for the type of stories it tells, and the game uses an alchemical chart to determine which "chapter" of the story the protagonist is in. It also adds the insidious forces preying on the protagonist as a die that chases them through the chart, creating some really cool tension out of a fairly simple mechanic.

Which, speaking of, TBE is generally easy to learn. It's well-explained, it has helpful reminders in a few places for how it's meant to be played, and in general once someone has read and digested the pdf, they can probably explain gameplay to another person in under five minutes.

That said, TBE might not be everyone's thing, as it uses a sanity mechanic a la Call of Cthulhu that has the protagonist developing fixations, aversions, etc as the horror around them worsens. The mechanic isn't connected to the game's ending, but it *is* connected to the really cool die that chases the protagonist across the board. So for folks who want to use it, but maybe not as a sanity mechanic, an alternate way of handling it might be to swap out the mental conditions for lingering supernatural effects.

Overall, if you want to tell a story like The Pear-Shaped Man or Outer Limits, and specifically if you want to do cosmic horror, Touched By Evil is a really good way to achieve that. You don't really get the experience from it that a survival horror game would offer (i.e. "can *I* survive this scenario?") but instead you get something that puts a lot more emphasis on telling a gripping story. I think this would be a heck of a game to play around a campfire, and I recommend it to gamers who want to feel uneasy, eerie, and scared.

Hell yeah, I love this! I think this is a beautiful work of cosmic horror. The indescribable nature of the Evil, the gradual progression of the loss of sanity... it all evokes the feelings I love from this genre. I think the choice of making it about a single protagonist that we all share was a really good pick, I have rarely seen it but I think it contributes to that feeling of separation characters often feel in this setting.

The Creeping Menace mechanic is also so interesting! The randomness the die bring lends itself to having games with vastly different pacing which makes replayability much easier, as it does the vagueness with which you describe the Shadows and their actions on the world. Fantastic work!

My favourite parts are the "Allowed Shadows" table (SO interesting, and useful, to portray so many different sources of unease that gradually increment in danger) and the "Neurosis" examples (especially the degradation that occurs if you get to read more than one line!).

Also from a reader's standpoint, the fact that it had hyperlinks made it much easier for me to understand what was going on, haha.

Anyway, thank you so much for this, can't wait to play it!

Hi, I am curious to know where you got the cover graphic from, because I made it in my junior year of high school in my computer class and did not intend for it to be distributed publicly. The game was a choose your own adventure that always ended in death and I worked really hard creating an original cover as well as a game for my final project. Could you please use a different cover? Thank you,

Photographer Shawn Hempel holds the rights to the image. Are you him?
If you show me some proof of origin/authorship or of your identity then I'll be more than glad to give you due credit, or even to remove it completely :)

Unfortunately, the original was made on a school computer. I don't mind you using it! I think it is great and I am flattered! I just was stunned to find something I made years later on the internet. Unfortunately, I do not know Shawn, but I might get in contact with him. Thank you, and please keep making games!

Is this based on KULT?

Style and inspiration wise... Clive Barker, especially his Books of Blood, is the main inspiration.

KULT takes inspiration from these same sources, among others, so yeah... you will definitely get a KULT vibe from Touched By Evil.

But mechanically it has nothing to do with neither the classic nor the new PbtA-ish editions of KULT.

It's much less an adventure that you can figure out set in a creepy world you can explore (as it often happens with KULT and Call of Cthulhu scenarios) and instead it's much more a disquieting trip that disturbs you through increasing dread and alienation while the protagonist spirals towards an horrific end.

Also it's gmLess and meant to play out in 2-3 sessions total :P

It actually take some elements from Montsegour 1244, if you can believe it :) 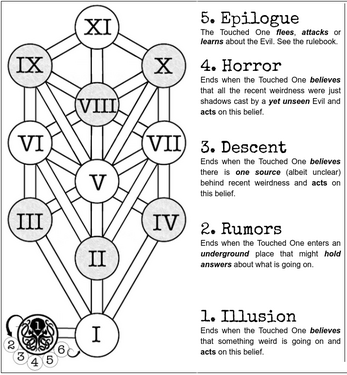